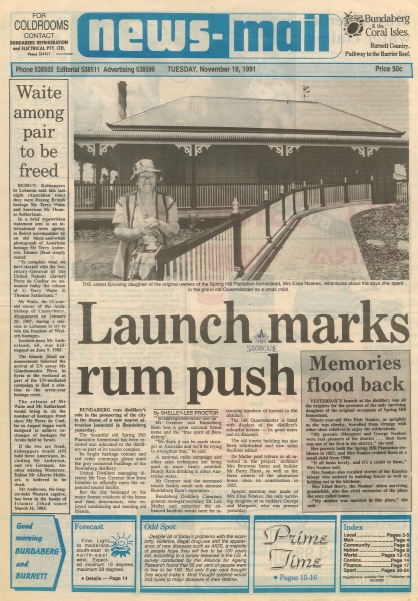 Image Caption: The oldest surviving daughter of the original owners of the Spring Hill Plantation homestead, Mrs Elsie Noakes, reminisces about the days she spent in the grand old Queenslander as a small child.

Bundaberg rum distillery's role in the pioneering of the city is the theme of a new tourist attraction launched in Bundaberg yesterday.

The beautiful old Sping Hill Plantation homestead has been restored and relocated to the distillery as part of its tourist complex.

Its bright heritage colours and red cedar trimmings gleam amid the grey industrial buildings of the Bundaberg distillery.

But the day belonged to the many former residents of the home and their descendants, who enjoyed reminiscing and meeting old friends.

“We think it can be made stronger in Australia and we'll be trying to strengthen that,” he said.

A national radio campaign and other sales techniques are being used to more firmly establish Bundy Rum drinking in other Australian states.

The old Queenslander is lined with displays of the distillery's colourful history – its good times and its disasters.

The old tourist building has also been refurbished and new toilet facilities added.

Dr. Muller paid tribute to all involved in the project, architect Mrs. Bronwyn Innes and the builder Mr. Barry Hurst, as well as the three owners of the plantation home since its construction in 1883.

Special mention was made of Mrs Elsie Noakes, the only surviving daughter of its builders George and Margaret, who was present yesterday.

Yesterday's launch at the distillery was all the brighter for the presence of the only surviving daughter of the original occupants of Spring Hill homestead.

Ninety-year-old Mrs Elsie Noakes, as sprightly as she was cheeky, travelled from Orange with other close relatives to enjoy the celebrations.

“My parents (Margaret and George Noakes) were real pioneers of the district...their farm was one of the first in the district,” she said.

Her parents built the Spring Hill Plantation residence in 1883 and Mrs Noakes resided there as a small child from 1900.

“It all looks lovely, and it's a credit to them,” Mrs Noakes said.

Mrs Noakes also recalled stories of the Kanaka labour who assisted in building fences as well as helping out in the kitchens.

Mrs Ethel Berry, the Noakes' oldest surviving grandchild, also has vivid memories of the place she once called home.

“My mother was married in this place,” she said.