Details:  On May 22, 2006, BDC proudly released it's oldest bottled rum ever to the public, a true Australian classic, Bundaberg Rum 18 Year Old.  It is a blend of rums aged for between 18 and 22 years in fifteen different vintage oak barrels.   Rich layers of flavour on top of it’s classic Bundy character gives Bundaberg 18 Year Old Rum a distinctly deep complexity and a mellow, woody finish.

Each bottle bears a unique number and the signature of Kevin Gott – Master Distiller and is presented in a wooden display case with a certificate of authenticity.

This incredible drop was pronounced by Kevin to be “Better than Liquid Gold”.

Each bottle was hand filled, sealed and labelled and presented in a wooden presentation box on a bed of straw complete with a Certificate of Authenticity.  These bottles were sold at selected bottle shops for $AUD150 RRP.

Variations:  The 18 year old dark rum was meant to be a run limited to 5,142 bottles, but the “Liquid Gold” started to run low and production numbers didn't actually reach 5,142 bottles. It is currently believed there were only 4,890 produced, making Bundaberg 18 Year Old even rarer, valuable & desirable. 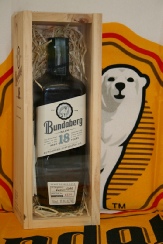