Details: Bundaberg Red follows a similar process as standard Bundaberg UP rum, being double distilled then aged in vats for 2 years.  The rum is then filtered 3 times, first it is chill filtered, second is an activated carbon filtration and finally filtered using an Australian Red Gum filter.  Bundaberg Red has been crafted to deliver an incredibly smooth taste while retaining the unique character for which Bundaberg Rum is famous.  Enjoy neat or with your favourite mixer.

Variations: To date, Bundaberg Red has had 4 Label variations.  The Original regular bottom label (trapezium with a semi circle at the top) was replaced in late 2011 with an updated version (trapezium) to include a more prominent Australian Red Gum Tree in the middle.  This also coincided with the change of the bear on the top label and a revised Cap design.

A 6,000 (5952) limited edition 700ml bottle “Red Racing” was released on July 4, 2009 to commemorate the launch of the Bundaberg Red Racing Team who contested the 2009 Australian V8 Supercar Championship.  The bottom label contained the signature of David Reynolds, the driver.  It was only available at the Bondstore for $AUD35 RRP.  This 700ml bottle came with a Certificate of Authenticity and a poster of the car, these bottles were NOT individually numbered.

In September 2010, Bundaberg Rum released Bundaberg Red “The Cats” a limited release of 25,000 individually numbered 700ml bottles to celebrate the partnership between the Geelong Cats and Bundaberg Red, both celebrating over 120 years of Australian Heritage, Alc/Vol 37%, $AUD35 RRP available in bottle shops. 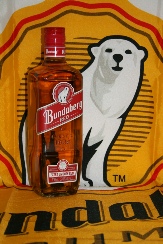