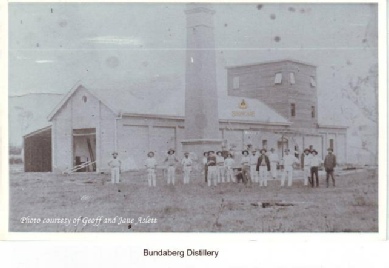 The original distillery was situated on a 1 acre oblong piece of land opposite the residence of Robert Cran, of Millaquin. The land had frontage onto the south bank of the Burnett River and had access to streets on two sides. The building was designed and construction supervised by engineer Grosvenor Griffin Francis and distillery manager, S.H. Bravo. The building was constructed of brick and was 136 feet (41.4528m) long and 27 feet wide (8.2296m). The walls were 15ft (4.572m) high. A tower was constructed in roughly the centre of the building for the two stills which was 38 feet (11.5824m) tall and made from hardwood. The building was divided into four compartments; Bonded Store, Still Room, Engine Room and Fermenting Room. Construction began 1 February 1889.

The whole lower floor was concrete, with a hardwood-grating covered drain running along the centre of the building which ran from one end of the building to the other. The gradient of the floor sloped towards the drain so the water had a ready fall and getaway ensuring cleanliness and comfort of the facility. The water was carried out into the river below the low water mark so to prevent a bad smell arising from the refuse of the still.

There were skillions on both sides of the buildings, measuring 14 feet (4.2672m) wide. Under the western-side skillion was found the molasses storage tanks, receiving tanks and storage for casks. The receiving tanks were in a pit located on the western side about the middle of the building and held 400 gallons each. There were 6 storage tanks at the south-west end of the building and held 2500 gallons each. Under the eastern-side skillion could be found the steam boiler which was a 24 horse power Cornish boiler made of steal. The chimney was constructed of brick and rose 45feet (13.716m) high. The motive power was given by a 6 horse-power Shank's horizontal engine fitted with Tangye's high speed governors. The boiler was fed by a vertical steam donkey pump from a hot water tank, the water being heated by the waste steam from the steam coils of the still. The distillery was supplied with water from a well in the centre of the building that was sunk 43 feet (13.1064m) and bored 18 feet (5.4864m). 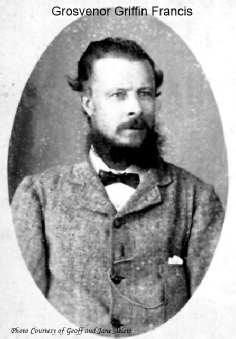