Details: To commemorate the career and retirement in 2011 of NRL and Queensland legend, Darren Lockyer, this six year old rum has been expertly crafted by the Bundaberg Distillers to signify Darren’s service to the No. 6 jersey and the end result is one with a great strength of character and richness, balanced with a unique smoothness.

Approximately 37,200 bottles are believed to be made available for sale in Queensland, however higher bottle numbers then this have been reported.

Variations:  He broke all the records for the most games ever played for Australia, Queensland and his beloved Brisbane Broncos. He is an undisputed legend and now the Bundaberg Distilling Company wants to celebrate Darren’s achievements with a special limited edition rum.  The first 200 bottles sold on the day had an opportunity to be signed by Darren Lockyer himself. Of the under 1000 numbered bottles, approximately 800 were sold on the day with the remaining 200 sold out by 11.15am the next day.

The release was significant for being a rare release away from the distillery, being held at the BWS Drive-thru at the Nudgee Beach Hotel, Brisbane. People had to register online for a position in the line if they wanted a bottle under 1000.  Rupert McCall was the MC for the day, which involved performances from the Brisbane Broncos cheerleaders, Broncos mascots, a free sausage sizzle of epic proportions and an opportunity to see the Bundaberg Rum Distillatorium. Not forgetting the man of the moment himself, who posed for photos and signed the bottles of those lucky enough to get their hands on one of the first 200 bottles sold on the day. Bottle number 6 was given to Darren.

Bottles only available in QLD and can be found at BWS Stores from 21st May 2012 and Independent bottle stores from the 24th May 2012. 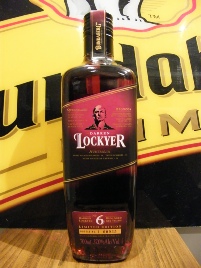