In the early days of the Distillery, the distribution processes were very different than

they are today. Until the 1970s, the rum was transported in barrels by either ship or

train, and bottled and packaged by many different agents around Australia.

Until the 1970s, there was romance in the shipment of rum.  No bottling was done at the

distillery: the rum went out in oak casks. The casks were mostly 60 gallon ‘hogsheads’,

various other sizes including eighteens, forties, sixties, and ‘puncheons’, which could be

anything from sixty gallons to a hundred.

The labour involved in moving the massive barrels was very intensive; there were no

forklifts and the full hogsheads weighed about 600 pounds, while the full puncheons

totaled about 1,000 pounds.  They had to be maneuvered very craftily on and off trucks with the use of skids – planks of wood used to create makeshift ramps.

In 1978 the hogshead, puncheon and all other barrels went out of use.  After this, if the rum had to be transported, it went by stainless steel tanker or as a bottled product.

Until the late 1970s, when the Bundaberg Distillery took control of

bottling the product, Bundaberg Rum was bottled and packaged by agents

throughout Australia (sometimes referred to as domestic bottling). The

range of agents was amazing.

and Co. (Cardinal Special Rum) both in Rockhampton; Samual Allen in

Townsville; P.J. Doyle in Cairns; Gatakers in Maryborough; and Walter

In the 1960s, Bundaberg encouraged the use of its own name by paying part of the costs of the labels.

Although the imprint “This is Famous Bundaberg Rum”  then appeared on the bottle, many of the

agents had their own chosen names.

There was no consistency of product between these agents and hotels, who broke it down

herbs.  Often they would also mix brands of rum.  Then, of course, there was the water, which

would vary incredibly from town to town.

Domestic bottling, except through special agents in Brisbane, Sydney and Melbourne, came to an end by 1978.

In the early days, most of the rum went by ship.  There was the Baralaba, the Babinda, and the Enfield – large ships that would take passengers as well as cargo.  But it was difficult for the distillery to run a consistent operation, with waterfront strikes a common occurrence, even in Bundaberg.  In 1948 the chairman, Ernest Percival Wyllie, reported  profits were down because of strikes on the waterfront.  For three months of the year there had been no ships at all.  The yearly average was 26 to 30 rum shipments; that year there were only 13.

Originally ships for the Distillery berthed at the wharf beside it, but the wharf was

destroyed in the 1936 fire.  From then on, all the rum had to be delivered by truck

to the Bundaberg wharf.  It was a sensitive arrangement under the watchful eye of

customs officials.  Each load had to be weighed before it left the Distillery, and

then weighed again when it reached the wharf.  The truck drivers were given a

precise time to get from point A to point B.  Just a minute over and they had to

have a good reason why!

Rum was also transported by the extensive rail network. Stories have been

rumoured about drilling of barrels from the back of trains when stopped at a railway station.  A heavy rum “sludge”, which had a very high concentration of alcohol, would sometimes accumulate in the bottom of the barrels. The shunters and goods shed staff used to check the empty return casks to see if they had sufficient dregs and   either tip the casks over to let the sludge drip out, or place long sticks into the casks to scrape some out.  Apparently it made a palatable beverage when watered down!

In 1951, when 15 year-old Keith Pohlman turned up at the the Distillery for job interview as the junior office boy, he felt that he was very well dressed.  He arrived on his black and white striped bike wearing ‘a nice white shirt and a blue tie with a nude lady standing under a palm tree on it.’  Afterwards he found out that the manager at the time thought he was ‘a bit of a lair’.  Notwithstanding this, Keith eventually got the job.

Keith remembers working at the Distillery in those days as being like part of a family, with people like Jack Kennedy and Horace Eaglesham, who had been working there for years, looking after him.  The organisation was also very set in its ways. Keith recalls: ‘If you wanted to buy a pencil or pad you had to get the General Manager’s approval. Once I got into strife for buying a ruler without permission.’

Eventually, Keith became Sales Manager, and then Secretary/ Accountant for the company.

As Sales Manager, Keith was responsible for getting casks of rum safely out of the distillery and to the hotels and other customers past the thirsty workers — a process which was sometimes a bit more complicated than you would think!

Some of the rum went by ship via the Bundaberg town wharf on ships like the Bingera and the Enfield, and the wharfies were always suspected of pilfering the rum.  On one occasion it seems they waited for high tide to get under the wharf, drilled through the nine-inch planks of the wharf itself, into a keg, then drained the lot.

On another occasion a hogshead of rum ‘accidentally’ fell out of a sling into the river. The word was that some wharfies were waiting downriver at Paddy’s Island for it to arrive.  Unfortunately for them, police got it first.

Keith had a 38 year career at the distillery and remembers it with affection. 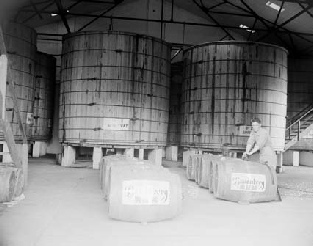 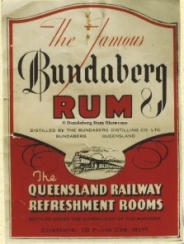 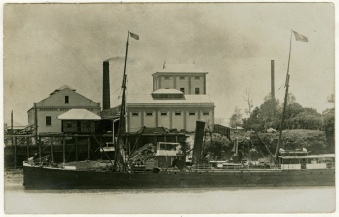 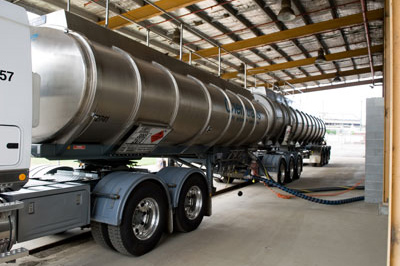 Thankyou to Keith Dunstan for allowing us to extract information from his publication “Bundy: A Centenary History”, 1988. 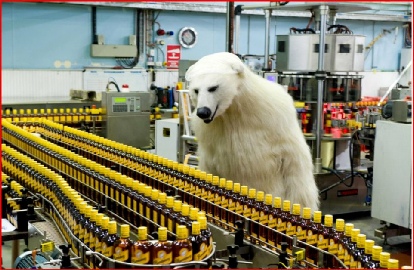 A special visitor inspects the “in-house” bottling plant at the distillery, in the picture on the right. Over half a million cases of Bundaberg Rum are bottled at the distillery every year. 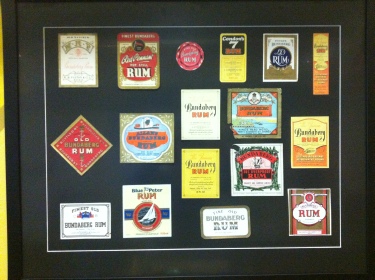