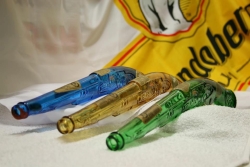 The famous Bundaberg Rum Royal Liqueur pistol decanters. The true “Holy Grail” for Bundy enthusiasts. No bottle attracts attention like a genuine Bundy pistol decanter and no bottle has more mystery surrounding it. We will here attempt to fill in some gaps in information regarding these bottles and dispel some myths about them.

Until now only some theories have been tossed around, some claiming facts but still the mystery of these unique bottles persisted. I decided a few months back to really dig into these theories and the history of the bottles themselves to once and for all give all Bundy enthusiasts the right information on them!

When researching glass or glassware, the first port of call should always be the labels and any marks on the bottles themselves. Most of the pistols (wine and Bundy ones) have some marks on the butt of the handle which has helped to identify the decanters. 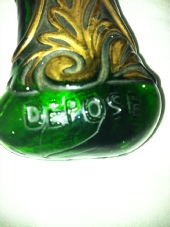 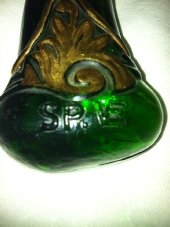 Depose: This is a mark which in many countries throughout Europe means “Registered” or what we would call copyright. This relates to the decanter design being copyrighted. It appears all the pistols (wine/Bundy) we have inspected have this mark.

SP.: A previous theory has stated that this stood for Spain and indicated that the bottles were Spanish in origin. This is not quite correct. While SP can mean “Spain”, according to MANY bottle collectors around the world (such as Wayne from Oz Bottles, Joseph from Glassfacets and many others) usually most glass for this purpose produced in Spain would not emboss their items with SP. They would either, for domestic use, emboss “Espana” or “ESP” (Espana being the actual name of the country...in Spanish) or literally “Product of Spain” for foreign tongues. The other piece of information which shoots the SP = Spain theory down is the fact another model of this pistol, the wood grain finish, which is smaller then the standard pistols, carries an “A” instead of the SP. At this time the manufacturer is looking into this mark for me, but the prevailing theory at this point is that the SP/A are model codes for the particular pistol. (The wood-grain finish pistol is a green glass decanter with a heat shrunk resin on it to make it appear like “wood”. Although it is of the same design, it is smaller then the regular pistols and thusly from a different mold) 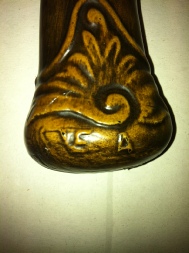 on the wood pistol

VE: This little mark was sure a tough nut to crack. Previously a theory was that this was the markers mark for a Spanish company known as Vidrala. Unfortunately, this is once again incorrect. A search would have shown that this is the makers mark for Vidrala:

Quite clearly, this mark does not match what is on the pistols. I would like to send a special thank you to Richard Foss at this point, author of Rum: A Global History and the man behind the website http://www.rumhistory.com for giving me a lead which ultimately led to solving this mystery.

Richard inferred that the VE symbol stood for vetreria, the Italian word for "Glassworks." Tracing this word I came up with a company called VETRERIA ETRUSCA. http://www.vetreriaetrusca.it/index-en.asp   The company’s logo and marker’s mark are below:

Vetreria Etrusca is an Italian company which has been producing containers in glass “Made In Italy” for over 60 years. You can find more on the history of this company here http://www.vetreriaetrusca.it/en/company/history.asp

You will mostly find the pistols used for wine decanters, primarily Barsottini Red Table Wine which was bottled by Casa Vinicola Boccaccio. The wood grain pistol was also used as a wine decanter. The green wine pistols were sold in a twin set in a carboard box to replicate old style duelling pistols. 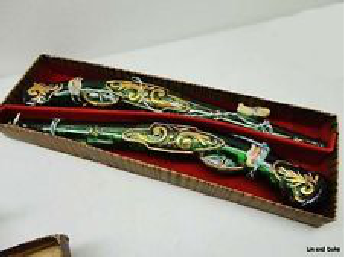 The Bundy versions of these obviously come in the three currently known colours (up until late 2011 the blue pistols had not been well known. In November 2011 Bundaberg Rum Showcase broke the news that the “new” colour had been uncovered.), the Green, Amber and Blue.

The Bundaberg Rum pistols were bottled by Frangos Liqueurs in Brisbane, QLD for Bundaberg Distilling Company. According to the labels, the pistols contained the Frangos Royal Liqueur, a choc-coffee liqueur.

(we are aware of differing theories on what the different colours contained. This is at this point only a theory with actual evidence of this so far not coming to light. When full genuine pistols of all three colours come to the public eye it may then shed some more light on this matter. Until then, you can only go by what is on the label.)

The labels on the green Bundy pistol differ from the amber and blue pistol. Firstly, the green pistol has the Frangos shield towards the butt of the pistol, with the blue and amber showing the “ballerina” logo, as also used on the White Lady rum. Also, it would appear that the genuine Bundy green pistols do not contain the SP or VE marks on them. We have looked at eight genuine green pistols and to date none have these marks on them, only having the DEPOSE. While this may be a help in spotting fake green pistols, it is not fool-proof, as we have also seen green wine pistols with only the Depose embossed. It is also worth noting the green Bundy pistols did NOT have the gold paint trim. (If anyone has a picture of a genuine green pistol with the SP VE or any other marks, we would love to hear from you)

Vetreria Etrusca no longer have records of the orders from this time (and therefore no order record from Frangos), so at this point it is impossible to say how many pistols were bottled for Bundaberg Distilling Company by Frangos. There are a couple more leads to follow up on this issue and will report back if any significant news comes forth. Vetreria Etrusca also made a range of coloured glass back then so it is possible other colours of these pistols are just waiting to be uncovered.

Because these decanters were also used for wine and other liquids, it is impossible to tell a rum pistol from a wine pistol (with the exception of the obvious gold-paint tell tale sign). It is evident the green pistols were the most widely used throughout the world. You can find the green wine pistols with gold trim at overseas Antique and Bottle traders and are quite common. Very few amber pistols have shown up in my research but do occasionally show up. Even less blue pistols have surfaced. As a good rule of thumb, if the pistol has no labels - assume it is a wine decanter as that was the most common usage throughout the world.

In short, the story of the pistol decanters are:

- Produced in Italy, by Vetreria Etrusca (confirmed by correspondence with the company)

- Made by semi-automatic machine

- To date, genuine Bundy green pistols do not seem to display the SP and VE markings (but would love to see images of one with the markings if you have one). Disclaimer: This is not a fool-proof way to spot a fake green pistol.

- Three colours of the Bundy pistols: green (which would seem to be the most common), Amber (harder to find than green but will pop up from time to time) and the blue (quite possibly the rarest of the three). According to a source that worked for Frangos at the time, he can only ever remember the 3 colour.

- Pistols were crated up in about a dozen and distributed. They were not individually “gift boxed”

If you have any other information or images that could further shed light on these remarkable bottles, please email me at troy@bundabergrumshowcase.com.au

Please enjoy the other images below of these decanters. 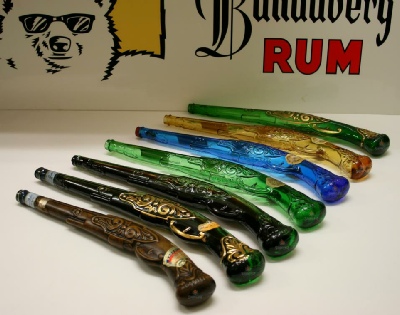 What you could call an arsenal of pistols. 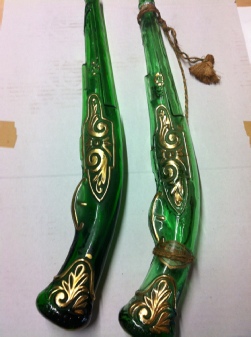 Slight colour variations exists in the green wine pistols. Although does not show up very well on camera, the pistol on the right in this image is visibly lighter then the pistol on the left. It is quite noticeable in real life. 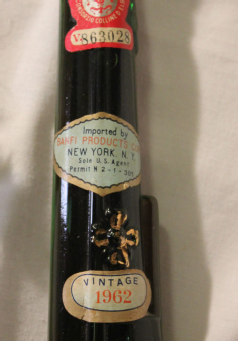 UPDATE March 2013: A wine collector reading this site has sent in a picture of a pistol decanter with a vintage 1962 sticker asking if the pistols were made in the late 1960’s, why does this pistol say 1962?

After talking to some bottle/wine collectors it would appear that the sticker (obviously) is the vintage of the wine. Wine is sometimes aged in barrels similar to rum, and this is likely what has happened here. It is similar in a way to the Bundy Blacks, ie the 1985 “vintage” Black was bottled in 1995.

Thanks to Steve for the pic and the question.