Details:  Both 2007 and 2008 8yo’s started their life late in the 20th Century as sugar cane, grown for 360 days in the fields around Bundaberg.  The cane was harvested and crushed with the resulting molasses refined, fermented and twice distilled.  Sealed away in fine oak vats to mature, the taste and aroma were checked to ensure the utmost quality.  After eight long years, the rum developed the rich smooth character required to be bottled, hand sealed and labelled as the exclusive Bundaberg Eight Year old rums.

Variations: 2007 bottles came in a smaller presentation box about 75mm square, these bottles were not individually numbered, however the number on the right hand side of the batch code on the rear label is a unique bottle number for quality control.  59,064 bottles released in 2007.

The 2008 came in the larger presentation box about 95mm x 75mm these bottles were not individually numbered.  There is no bottle number on the batch code on the rear label. 94,500 bottles released in 2008

Both bottles sold in bottle shops for $AUD49.99 RRP. 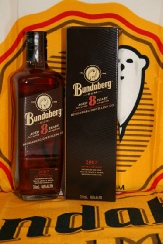