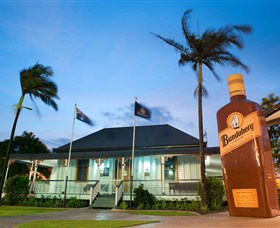 The builders, the Noakes brothers were pioneers of Bundaberg and its sugar industry. They were inaugural shareholders in the Distilling Company and the initial suppliers of molasses, the raw material for rum manufacture, which is a residual product of sugar manufacture.

The next owner, AP Barton, another district pioneer, was also an inaugural Distilling Company shareholder and Company Director and chairman. The third owner was Fairymead Sugar Company Limited, now the Bundaberg Distilling Company is the proud owner.

The following information is a brief history of Spring Hill plantation and house and the people who have lived in it and been closely associated with it.

George Noakes, the builder and occupier of Spring Hill until 1898 was born in Maitland, New South Wales in 1848 to Ann Noakes, wife of James, a sergeant in the 58th Regiment of Foot who came to Australia in 1844. George was one of the earliest settlers in the Bundaberg district arriving in 1871. He was joined in 1873 by his brother, James Equestrian Noakes. Initially they cleared the dense timber and grew maize.

Sugar cane was first grown in 1881 and a juice mill installed in 1883, the juice being pumped eight kilometres to the Millaquin refinery through underground pipes. In 1888 a full sugar processing mill was installed. The molasses by-product was sold to the new Bundaberg Distilling Company.