The Cutty Sark was a clipper class sail ship that came towards the end of the age of sail. It was one of the fastest in the class. The ship, after a brief period of transporting tea, spent most of its time transporting wool from Australia to Britain. It held the record for the quickest passage between the two countries for 10 years. It went through further periods of being a cargo ship and training vessel until 1954 where it was retired to a permanent dry dock in London, where you can still see it today. It is a very famous and well known ship, even today. For more reading on the “Cutty Sark”, you can do so on wikipedia by clicking HERE 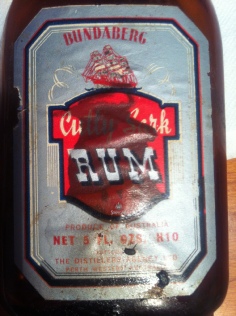 In terms of Australian rum, the only information we could find is a Cutty Sark Rum that was made and distributed by the Colonial Sugar Refining Company, or what today we know as CSR. The earliest mention of this rum is 1939 in the following adverts: 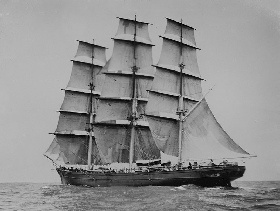 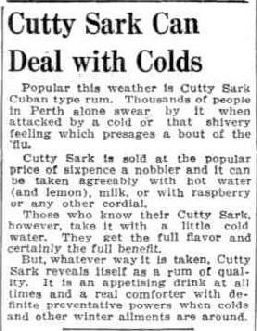 (CSR's distillery assets were eventually acquired by Bundaberg Distilling Company, but not til much more recent times).

The Distillers Agency LTD was based in the UK with offices in Australia. They were well known for being the agents for Drambuie and King George Old Scotch Whisky, however their interests were vast in the liquor industry. They were also listed as an agent for Bundaberg Rum, but more recent information has come to light that suggests that there was no official connection between BDC and The Distillers Agency. In more modern days the Cutty Sark label itself  is more associated with other imported spirits. 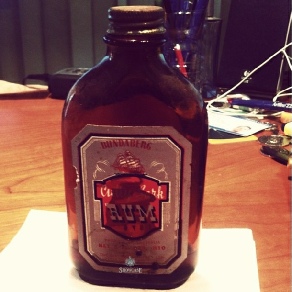 Then, what exactly is this Cutty Sark Bundaberg bottle? We sent the image to our good friend Wayne, from Oz Bottles, who estimated that the bottle could likely come from the 1940's to 1950's (judging by the style of bottle). Unfortunately it seems this is one of those labels that really has been “lost to history.” The Showcase team though have formed a theory (and we stress theory only!) based on the following facts:

a) The Cutty Sark was retired in 1954, and is/was very well known in Australia

b) Bottle style fits into the 1950's time frame

We feel it is likely that this Cutty Sark label was used by The Distillers Agency as a commemorative type bottle for the retirement of the Cutty Sark vessel in the mid 1950's. The Distillers Agency was well known for capitalising on themes relevant at the time to help sell their products. A prime example of this is the “Treasure Island Rum” (Click HERE for more information on Treasure Island Rum) that was distributed by them during the golden age of “Buccaneer/Pirate” movies (interestingly also in the 1940's and 50's). The retirement of such an iconic ship would certainly be an attractive occasion to the Agency, especially as they were based in the UK and the ship was docked in London.

An interesting twist though could also appear in the tail of this bottles story. Is it actually Bundaberg Rum? CSR clearly owned the Cutty Sark rum “brand” which we have traced to at least the 1950's also. One would not think CSR would look favourably on someone else using their brand name. Stories exist that some distributors back in the day would use the word Bundaberg on their rum even though their product had absolutely nothing to do with Bundaberg Rum. The reason for this? Bundaberg had a very good reputation over the country and was well accepted that the Bundaberg Distillery was the biggest and most modern distillery in the Commonwealth, so agents would capitalise on these facts to help sell their product. Given some evidence suggests nothing official was between BDC and the Agency, we in the Showcase team actually wonder if this is such an example of a non-Bundy Bundaberg Rum?

Unfortunately we may never know and likely information on this particular bottle is probably lost and gone forever.

Thanks to Ian for sending in this remarkable piece of rum history! 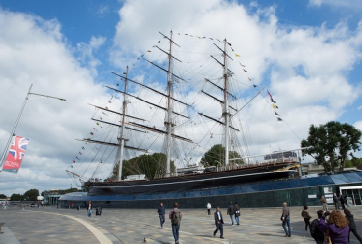