Jim recently sent us a picture of this stunningly preserved bottle of Treasure Island Rum, wondering if we could help him with some information on it and asking if it was indeed Bundaberg Rum. The history and story of this actual bottle itself is something remarkable. Jim has been caring for this near perfect example for the past 47 years, having rescued it from a collapsed storage/access tunnel connecting an Adelaide hotel to the adjacent brewery in about 1965.

As for the rum itself, that is a little bit more tricky as information on this rum is certainly scarce. What we do know is that it came in at least two different sizes, 13 FL Oz's and  1 Pint 6 FL Oz's. It was available for purchase from the earliest found record in 1946, however it could certainly date from earlier then this. (NB: Some records from earlier then 1946 reference “Treasure Island” rum however this does not refer to this actual “brand” but more a figure of speech.) It cost 6/9 for the smaller bottle and 12/9 for the larger of the two in 1946, rising to 7/6 for the small and 14/- in 1949. The Distillers Agency Ltd filed for the Treasure Island Class 33 trademark 28/11/1947. 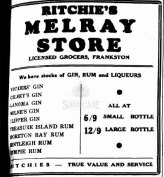 The two different labels found so far. An advert from 1946 showing costs for the Treasure Island Rum.

The rum, is evidently a product of Australia given the “Produce of Australia” on the label (a source suggested it could be an imported rum from the Caribbean or elsewhere hence the pirate theme, but personally I feel the “Produce of Australia” nullifies this theory). The rum was bottled by the agent The Distillers Agency LTD, which was based in the UK with offices in Australia. They were well known for being the agents for Drambuie and King George Old Scotch Whisky, however their interests were vast in the liquor industry.  They were also an agent for Bundaberg Rum.

An interesting footnote here to this rum came up in our research into Treasure Island Rum. The 1940's and 1950's were really the golden age for Pirate/Buccaneer movies, with such famous movies such as The Black Swan, Sinbad the Sailor, Captain Kidd and of course the Disney production of Treasure Island. 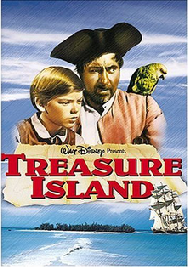 Mention of the publicity campaign for the movie using

Now, the important question....Is Treasure Island Rum Bundaberg Rum? That is a good question and in all honesty the jury at this time is still out. The fact that The Distillers Agency was in fact an agent for Bundaberg Rum certainly opens up the door that it is POSSIBLE that the bottle contains well preserved Bundy Rum but is certainly no guarantee that it was. Many distributors and agents had their fingers in many pots and the Distillers Agency was no exception. It is also known many agents made their own blends from rums of different distilleries and/or other liquids, so it is equally possible it is a blend containing Bundaberg Rum.

Another consideration is although there were no requirements back then to brand the rum as “Bundaberg” many agents still made some reference to the rum's origin on their labels. This was because Bundaberg had a very good reputation over the country and was well accepted that the Bundaberg Distillery was the biggest and most modern distillery in the Commonwealth, so agents would capitalise on these facts to help sell their product. Agents such as Richard Holmes & Co, used Southern Cross brand however still made the fact it was Bundaberg Rum prominent. Other examples are Thomas McLaughlin with his Peerless Rum, the Goldsborough Mort produced Dreadnought Rum and Walter Reid had Old Digger -but all made it prominent that the product was in fact distilled by Bundaberg. Even The Distillers Agency have rum labels highlighting Bundaberg Rum. So does this point to it not being Bundaberg Rum? Perhaps. Or perhaps they were cashing in on the publics love affair with pirates and buccaneer films of the day and 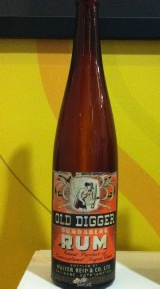 branding their rum “Treasure Island.” Alluding to it being distilled in Bundaberg would certainly contribute to the illusion of it being a “pirates rum” being shattered. A pirate theme would also conjure up thoughts of perhaps the most well known rum in the world, namely those from the Caribbean, and thereby differentiating the rum from their competitors. Following from this also we know some agents and distributors certainly made no mention of Bundaberg Rum on their labels, such as the Burnett Club.

In short people reading this are probably no closer to a definitive answer to the “is it Bundy or not?” question, but arguments for and against certainly exist. It is most definitely possible that it is Bundy rum branded to capitalise on a theme. It is most definitely possible it is a blend containing Bundy rum. Unfortunately it is also possible that it is not Bundy Rum at all. The Showcase team is also split on this question after looking at all the details, at this time all we can really say is; its  POSSIBLY Bundaberg Rum. Regardless if it is Bundy or not, it is still a remarkable piece of history and an even more remarkable bottle considering its age and condition. We can not thank Jim enough for sharing this picture with us.

We will continue looking for information that will shed some more light on this bottle, and have forwarded the images to some world renowned authors on Rum and bottle experts that have been very helpful to us in the past to see if they know of anything that may help. We will keep you all up-to-date with what we uncover! You can also find larger versions of the bottle images by clicking HERE