Details: The latest brain-fruit of our noble Master Distillers' Collective, Dark Oak was inspired by local barrel-baron Dave Schmeider, who handcrafted the original oak barrels used to create this rum. To honour the humble cooper, our master craftsmen filled heavily charred American Oak barrels with some of their richest and most delicious rum reserves.

Our fourth release is dark and rich with a glorious oak aroma. A well-balanced finish of deep caramel and sweet raisins will convince the most demanding of tongues. 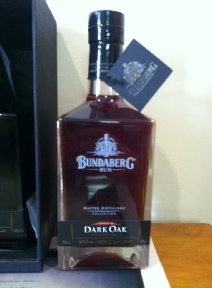 According to an article on EFTM: “Back when Bundaberg Rum first decided to start creating special blends of rum aged in small barrels, they had their vat maker create a small oak barrel to test the idea. Charred on the inside, the barrel quickly turned the rum into an unpalatable liquid.

Fortunately, the distillers had the foresight not to throw the rum away, instead storing it at the back of the distillery’s new barrel house.

Years later, the distillers tried the rum again while trying to decide what to do with it. To their surprise, it had acquired a much gentler, attractive flavour, and wasn’t just drinkable, but enjoyable.” (Click HERE for the article on EFTM)

Each of the 60,000 bottles of this limited release is individually numbered, and so lovingly crafted that our Master Distillers' Collective were reluctant to part with a single bottle. But we have plucked those bottles from their hoggish clutch. Bottles numbered under 1000 came with a special display box and poster. $109.99 sold at the Bond Store. All under 1000 numbers were sold on the day of release by between reportedly 1pm and 2pm (to be confirmed), with over numbers well into the 3000’s by that time. Numbers over 1000 were sold at the Bondstore for $89.99 per bottle, before being made available to national bottleshops.

The first 250 phone orders of Dark Oak from the Bond Store also had an opportunity to purchase a limited edition display box for the price of $20.

The event featured an opportunity for people to have their bottles and boxes signed by the 3 Master Distillers, a taste testing opportunity, a feedback card to leave ideas and suggestions for future rum releases and live music entertainment. BDC also provided breakfast and juice for those hardy folks lining up during the morning.